Fall Color is a tricky thing. You know about when it is supposed to come, but you never know exactly when it will come. That’s the predicament Christine and I run into every year when trying to pick a time to go shoot the color at our favorite destinations. You have to commit to a time to take off and go – and it’s often just your best guess as when to go based upon whatever reports you can find. This year, due to our busy schedules, we decided to take a shorter trip and camp out at Petit Jean State Park in Arkansas rather than pick a house through VRBO as we often do. Besides, we had both been talking about going camping for a while, so why not do it to go shoot some Fall color?

Remember, this is Fall color we’re going after so camping tends to be a bit on the cold side during the middle of November in Arkansas. Nevertheless, we loaded up our tent and gear in our SUV and set the GPS for Petit Jean State Park. We figured since we were heading out Friday and would only be camping out for two nights the cold wouldn’t be a big deal. We had reserved a camping site that had an electrical hookup, water and a graded campsite with a bath house nearby that included hot showers so we were excited and ready to go. Taking off work at noon on Friday though meant we arrived well after dark and pitched the tent by the headlights of our SUV. As expected, the temperature was down in the low 40’s so we slipped into our night clothes and piled on the blankets and drifted off to sleep with the smell of campfires all around us.

The next morning, we didn’t waste any time getting up and putting on a few layers of clothing knowing as the day wore on we would pull a layer or two off. With the smell of breakfast cooking everywhere we made our own and shot some video around the campsite then clamped a GoPro onto the windshield and headed out. Prior to our trip we had scouted several places online and we chose to head to Mt. Magazine and the Benefield Trail that we had hiked with Mark Morgan a few years back. Looking around the color wasn’t all that spectacular, but we knew from experience you could travel around and often find better color. So, we headed on to Mt. Magazine in the hopes of a little more color and hiking a trail we knew a little bit about. It was there that I had shot one of my images which I named “Black Rock Arkansas” which is a perennial seller. (side note: The name is a play on a band named Black Oak Arkansas – and it just popped into my head when I was trying to name it.) 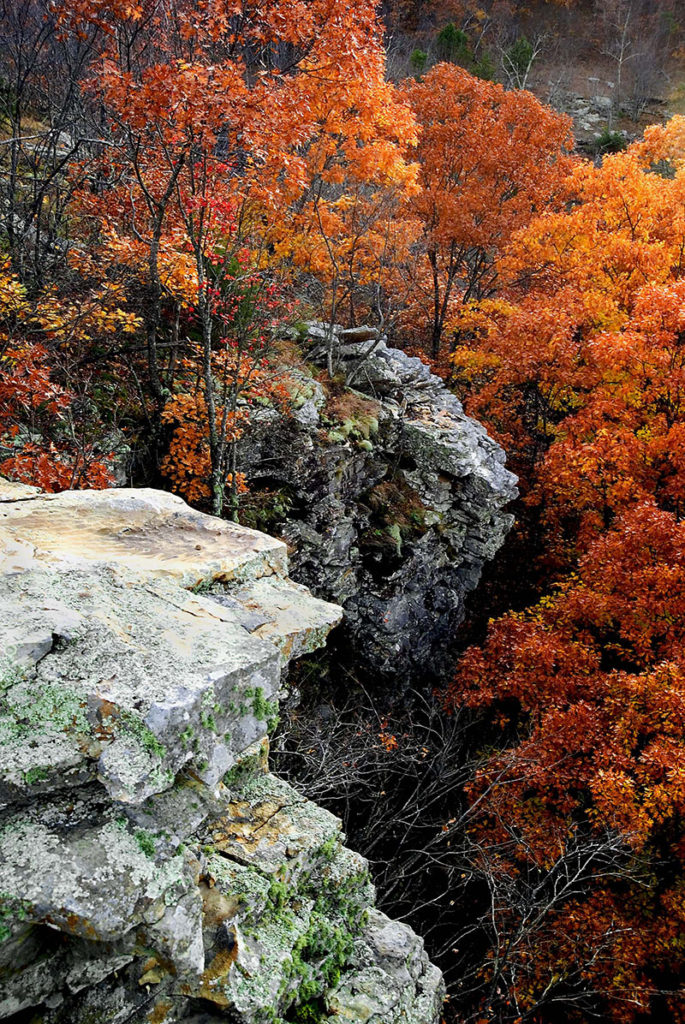 In case you haven’t driven around Arkansas before, the roads wind and wind and wind. Getting somewhere takes a while so even a place only 35 miles away can take almost an hour to get to. It wasn’t looking good though as we got closer. Some patches of color but a lot of green and brown leaves. We couldn’t quite tell if we were too early or too late.

We arrived at the Benefield Trailhead and separated our gear from our main bags into our field bags and headed out in the hopes of finding some color along the trail. Even though it was a weekend, there were only a handful of people on the trail so it felt like we had it to ourselves most of the time. As we hiked down the trail we stopped and worked on getting shots whenever we found something of interest – pausing for as long as we needed to exhaust our ideas for compositions of our new found subject. We would hike together again and then wander off as we spotted something we wanted to shoot. (Oh look….. over there!!!!) Along the Benefield Trail are additional trails that branch off and return at another point and we eventually took the Bear Paw branch which leads along the cliff to an area known as Inspiration Point. It was here that I broke out my Really Right Stuff Panoramic rails and composed a single panoramic shot. Unfortunately, the shot had two things working against it. One the sky was cloudless and the other that the Fall color really hadn’t moved in yet. Still, it was a good opportunity to practice my panoramic shooting technique.

We spent a good amount of time working out different shots at Inspiration Point until the sun dropped behind the hills and we knew we needed to start our hike back. We started back down the trail, but we continued to stop and shoot bits of color we found here and there knowing we could always use our headlamps and flashlights if it got too dark. So, we took our time and gathered some more shots as we worked our way back to the trailhead. I haven’t seen Christine’s images from the hike back yet, but I wound up with one that was a keeper and I’ve already added it to our Industrial Iris Studio site.

By the time we got back to the car the sun was down below the horizon and the temperature had dropped – and we were ready to get warm and go eat. Knowing we had an hour plus drive to get back we grabbed a snack from our ice chest and pulled back out on the highway. We decided to check the weather forecast for the evening and it showed the evening temperatures were going to be about 10 degrees lower than the previous night. Since we had an electrical hookup outside our tent, we decided to pick up a ceramic heater made for tents on the way back to our campsite. We picked up the heater and a few other things at a Wal-Mart and then stopped to eat at Tropical Café. After dinner we grabbed a quick look at our images and then zipped ourselves into our tent, cranked up the heater and fell asleep.

Our second morning dawned crisp and chilly. And I do mean chilly!   We hit the showers and packed up our camera gear, tent and other goodies since we would be driving back later that day and jumped into the SUV to go shoot. Before we came we made a list of potential sites to shoot, but with the Fall color being so sparse we decided to head down the road to the Petit Jean’s Mather Lodge where there is a trail that runs to a waterfall. Maybe we could shoot that! Getting out at the Lodge we hiked down to where you could see the waterfall, but found it dry. The massive rains that had plagued Arkansas a couple of months earlier had dried up and Arkansas’s plentiful number of waterfalls were unusually dry. We hiked around a bit and took some pictures and worked our way back up to the Lodge to take in some breakfast and stare out the huge windows overlooking the hills below the Lodge.

After breakfast we got in the SUV and started considering our options. We hit Facebook to check in with others shooting in the area on the conditions they found. There was some color coming in further South of us from what we learned, but the time it would take us to get there would leave us little time to actually shoot. Weighing our options, we decided to head back to Mt. Magazine and hike some of the off-shoots of the Benefield Trail and shoot around the top of the mountain then head for home. Throwing the SUV in gear we headed for the familiar trail and plugged Christine’s iPod into the SUV sound system. I got her a 180 GB iPod a while back and she has enough music on it to drive cross country and never hear the same song twice! We set it on shuffle and took off!

Arriving at Mt. Magazine we took off down the same trail and then cutoff onto a new branch we had not been down before. Once again we pretty much had the entire trail to ourselves. We hiked along in the quiet with only the sounds of our steps on the fallen leaves under our feet. That’s one of the things I like most about hiking deep in the woods – the quiet. If you stand still and breathe slowly it almost seems like you’ve taken a step out of Time. You can see and feel what it is like in the woods – even when you are not there. It’s moments like these that I like to take in and remember and return to after I return home.

Gary and Christine at Inspiration Point

We continued to work our way along the side trails until we hooked up with the main trail again and followed it until it took us back to Inspiration Point. We were here earlier in the day this time so the light on the land was different. We took about an hour to shoot and decided if we were to get back home at a decent time that evening we had better head out. Packing up our gear we headed back to the SUV with limited stops for shooting. We loaded our gear back into the SUV and set the GPS to Go Home and took off. A mere 6 hours later, taking into account stopping for dinner and fuel, we were back home and unloading our gear into the front living room. Tomorrow we’ll unpack.