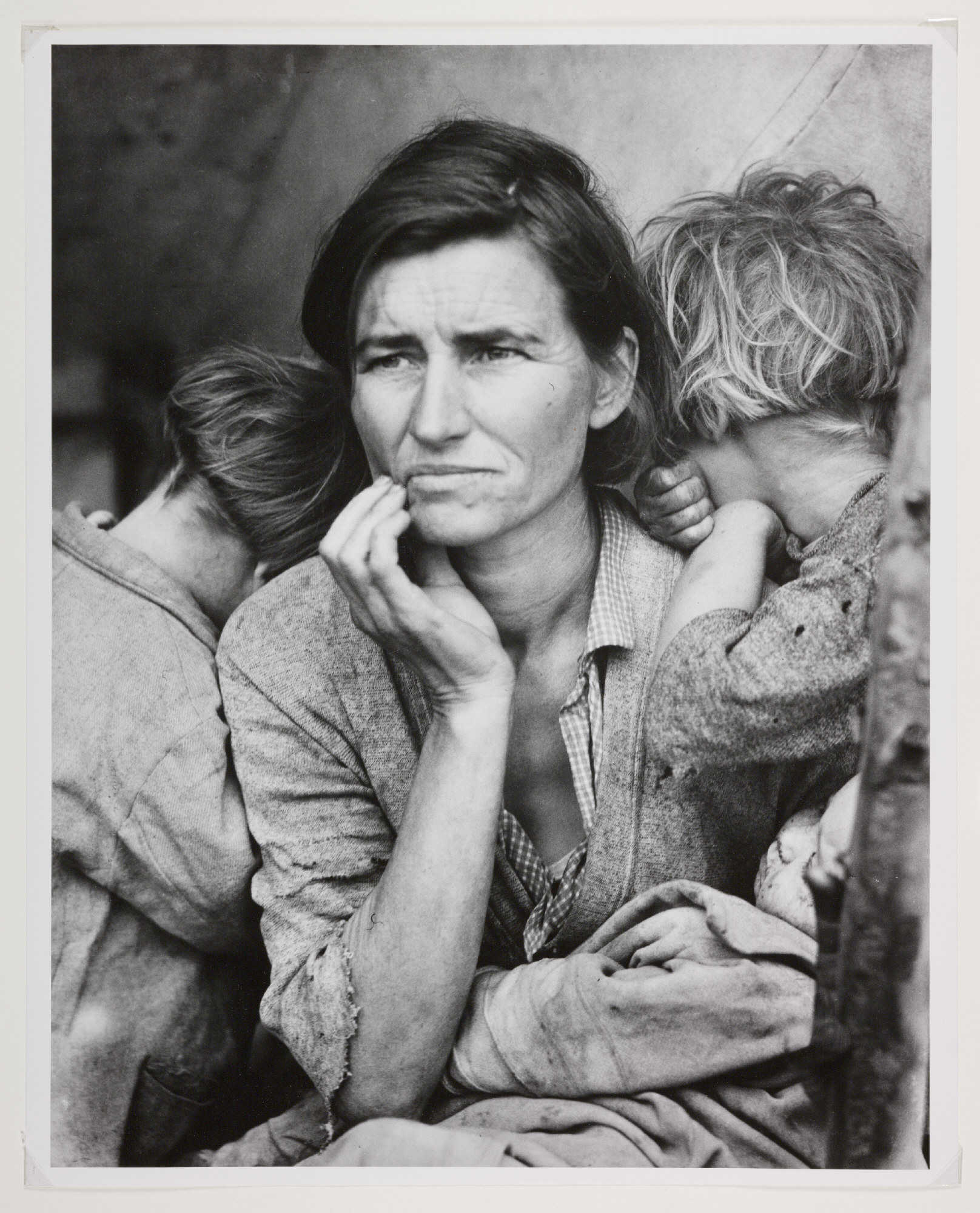 The iconic image of The Great Depression known as “Migrant Mother” was taken by studio and portrait photographer turned government photographer for the Resettlement Administration –Dorthea Lange.  Turning away from her studio work as she saw the suffering going on around her, she joined the Resettlement Administration– a New Deal agency – tasked with helping poor families relocate. 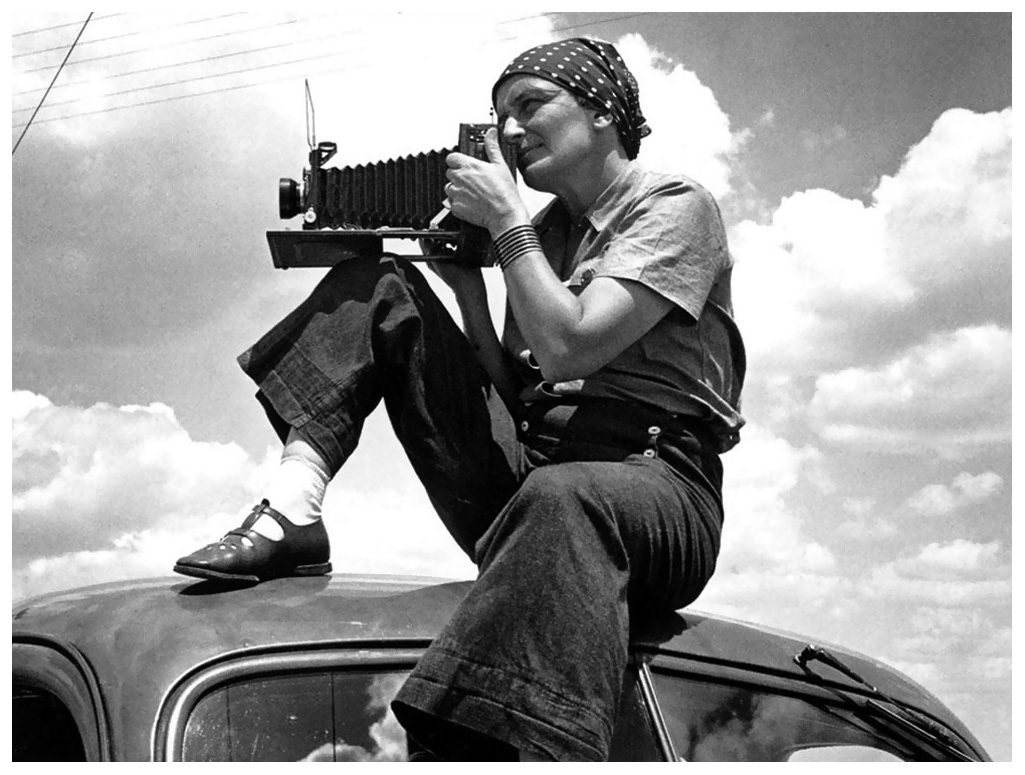 One day in 1936 Lange found herself in Nipomo, California at a campsite full of out-of-work pea pickers.  The crops had been destroyed by a freezing rain and there were no crops left for anyone to pick and Lange approached a woman sitting on a cot just inside a tent with her 7 children and asked if she could take her picture.  She didn’t ask her name or how she got there, but the woman did tell her she was 32 years old.  She said that she had been living off of the frozen peas and some birds her kids had killed and she had just sold the tires on her car to buy some food.

Lange took six pictures that day, with one of them – later to be called “Migrant Mother” – the image which would put a face on the plight of those in the Great Depression who had little to go on.  In the image her children turn away from the blowing dust as their mother looks out over the open horizon seemingly contemplating where their next meals might be found.  In looking at the image, you have to wonder how she got there, where was her husband and what became of her?  The thing that makes the image so compelling is how you can see the worry in her eyes – you can almost see her thinking.

Lange had promised her she would not ask her name in return for the photographs, as she said she did not want her children to ever be embarrassed at their poverty.  But, she consented to the images because it might help bring awareness to the plight of those in the camps like the pea pickers had set up.  At the time the image was published, no one knew her name or what happened to her until 1978 when a reporter from the Modesto Bee tracked her down to a trailer park outside Modesto, California.

Her name was Florence Owens Thompson and she came from Indian Territory where she was born in 1903 in a teepee in what would later became the state of Oklahoma.  At 17, she married then moved to California for farming and millwork.  Later at the age of 28 and pregnant with her 6th child, she lost her husband to tuberculosis.  She worked at odd jobs that were available to keep her children fed and for most of the 1930’s she was an itinerant farmhand and picked whatever was in season.  Often she joined cotton harvests and even though she barely weighed a hundred pounds, she said she would often pick 450 to 500 pounds of cotton a day – at a rate of 50 cents per 100 pounds.  Without the resources to buy a home, her family often lived in tent, their old car or even under a bridge.  Like the people living under the bridges in George Steinbeck’s “Grapes of Wrath” they would camp and sleep under a bridge with only an old blanket to sleep on.  It was in 1936 when driving from Los Angeles to Watsonville, that her car broke down and she had it towed to the nearby pea pickers camp where it eventually got repaired and she was about to leave when Dorthea Lange arrived.  Within days the image was published and became an instant classic – becoming the “viral” image of its day and encapsulated the despair of those who got by day by day.

Eventually, Thompson moved to Modesto and got a job at a hospital there.  To keep her family together and fed, she often worked 16 hours a day – 7 days a week. Combining her hospital job with other jobs like tending bar and seasonal picking work, she strived to make a living for her family.  The Thompson clan eventually worked their way into middle class where her kids bought her a home, but she chose to live in a trailer where she felt like she could pick up and go – never feeling settled.  In 1983 she suffered a stroke which she died from shortly afterwards. Her children, unable to pay the hospital bill used her identity as the Migrant Mother to raise $15,000 in donations to pay the hospital.

Dorthea Lange’s images helped to bring light to those in need and helped her develop a reputation which earned her a Guggenheim fellowship and cemented her place in the history of American photographers.  While Lange sometimes grew frustrated that her work didn’t always provoke society to correct the injustices she documented, her photography has endured and greatly influenced generations of documentary photographers.