Today is actually day 5 of our trip, but day 4 of our photography excursions on this trip.  We traveled from Mena, AR to Branson, MO and after unpacking and settling-in to our cabin in Branson we took the day (Saturday) off just to relax, do some shopping (groceries and other kinds) and think about where to start shooting next.

Our first choice as to where we wanted to shoot today is around the Buffalo River area which we have been to before on a previous trip.  There are a lot of places along the river to shoot and it is easily accessible as it stretches a long ways across Arkansas.  Our particular spots for today’s trip were to Steel Creek and to Lost Valley which are near the river and to each other.  The distance to this area isn’t that far, but the winding roads keeps the speed down and it took a while to get there.  Both of these areas are close to the Buffalo Outdoor Center company store which is a great place to stop and purchase food items or the other things you might need for a day out in the woods or along the river.  They have a nice deli and make excellent sandwich items and salads and you can sit out on the porch if the weather is nice to eat. 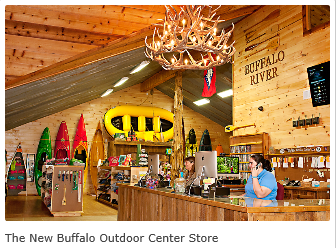 If you head South from the Buffalo Outdoor Center you will come to the turn off for Steel Creek or if you continue on a few miles down the road you’ll come to the turnoff for Lost Valley.  We chose to head down to Steel Creek first as it has a Ranger Station and the river runs right by it.

We loaded up with some extra food items at the Buffalo Outdoor Center and headed to Steel Creek and the river and hiking trails there.  Once you leave the main highway, it continues as a paved road all the way to the Ranger’s Station and you pull into a large open area where you can park just about anywhere along the road or in the open field which runs alongside the river .  When we arrived there were a large number of horse trailers parked in the area and people were cooking out so the scent of campfires filled the air.  Along with the hiking trails, there are also separate horseback riding trails through the park and forest areas, so there are often horse trailers present at the site.  We found our way to a parking spot and decided to stop in at the Ranger’s Station to check in and see if there was anything we needed to know about before heading out to shoot.  The Ranger was really helpful in explaining to us where the trailheads were around the park and giving us some ideas on other locations in the area to consider going to shoot.  We decided our first place to shoot for the day would be from the open fields along the river which just happen to be below the large bluffs that ran alongside the river at this point.  The bluffs shoot straight up from the river bank and are white/gray rocks which have a row of trees that grow along the base.  At the height of Fall color these trees sport yellow, red and orange leaves against a largely white rocky background making for striking images.  We arrived about mid-morning and the skies were still a bit overcast so were missing the sunlight on the face of the bluffs and trees we were hoping to get.  Still, with the clouds hanging over the top of the bluffs, the weather created opportunities for some interesting images.

It also gave me the opportunity to start working with my new Really Right Stuff panoramic rails for creating multi-row panoramic images for printing as super large prints.  I decided to start out with creating a single row panoramic image and chose my 50mm prime lens to capture the images.  Hiking out to the middle of the field I setup my tripod and added the rails to the ballhead  and planned out my shot.  I figured I would pick a spot on either end of the bluffs and begin and end my panorama at those points.  I leveled the tripod and checked the bubble on the rail to make sure it would be level all the way from one end of the shot to the other and began taking images in a portrait orientation, overlapping each image by about 30%.  In total, I took about nine images that I would later combine into one large single image in Photoshop.  Prior to the trip, I had taken each of my lenses out and performed some tests to determine where the nodal point was for each lens.  I took that information and recorded it to my cell phone so I would know where on the rails to locate each lens while in the field to make setting up shots quicker.  I didn’t worry too much about composition as this was just an effort to learn how to use the rails in creating a panorama, so the resulting image is not one I would put in my portfolio, but it helped me understand how to set everything up and capture what I needed to create a panoramic image.  Below is the test panorama I created from the test of the rails:

My thoughts after pulling the image together is that this system holds the key to creating the large format prints I want to create for sale as art pieces to go in large lobbies or public spaces.  Now I can begin developing concepts for images and spaces that would benefit from displaying large format prints.  (Side note:  after stitching the image together after the trip it turned out to make a 4 foot by 17 foot image.)

As the morning continued to move towards noon, the clouds began rising and breaking up – eventually to clear off completely and leave us with completely clear skies.  Not a photographer’s favorite thing to have most of the time.  By having a few clouds in the sky, interest is added by giving you some texture and breaks up the solid blue expanse of the sky.  We continued to mill around for a bit, but decided it was time to move on and we headed back to the Buffalo Outdoor Center for a break before moving on to our next location – the Lost Valley trail.  Since it was now just past noon we decided to eat and take a break for a bit at the Center, so we went in and I ordered a sandwich at the Deli and went out onto the porch to eat. Christine wasn’t as hungry and she had some snack bars so she decided to have one of them and take some time to do some reading.  One of the nice things I like about the porch is that it has bar-top like place to eat that looks out over the area and bar stool seats so you can sit and watch the world go by while you eat.  We took a long leisurely lunch break then left for the Lost Valley trails.

Only about 2-3 miles from the Center is a turn-off to the Lost Valley trailhead.  Once you turn off the road it is a fairly short drive down a dirt road to the trailhead where you will find restrooms and parking.  The trail is wide, smooth and well-maintained and runs alongside a river, (if there has been recent rain) and is a great hike for all ages.  The trail is almost like a wide sidewalk cut through the forest, only it is covered with very fine gravel and kept in place by plank curbs.  It is a really enjoyable hike where you are completely surrounded by forest and the trees rise to 60-80 feet tall.  Because of this you get the sunlight creating dappled light throughout the forest, rays of light streaming through the trees and the ability to get a sunburst image using the leaves or a branch to block the light and using a small aperture.  With the colored leaves filtering the sunlight, you find yourself standing in a forest lit with a yellow/orange glow and it is like hiking in a perpetual sunset. Here again was a place to try out something new – my new GoPro Silver + which we had acquired for this trip.  Putting the GoPro on a 3-Way stick we were able to shoot video of our hike, along with using the tripod base of the stick to set it up and speak directly to the camera to describe the trail.

The Lost Valley  trail provides a wide variety of image opportunities from the jumbled rocks of the dry riverbed, to colorful leaves on branches hanging overhead and the small details abundant in the forest.  We spent the rest of the afternoon hiking the trail until it started getting dark and then we began our trek back to the trailhead.  Once back, we packed everything in the SUV and began the winding drive back to our cabin and to fix supper in Branson.