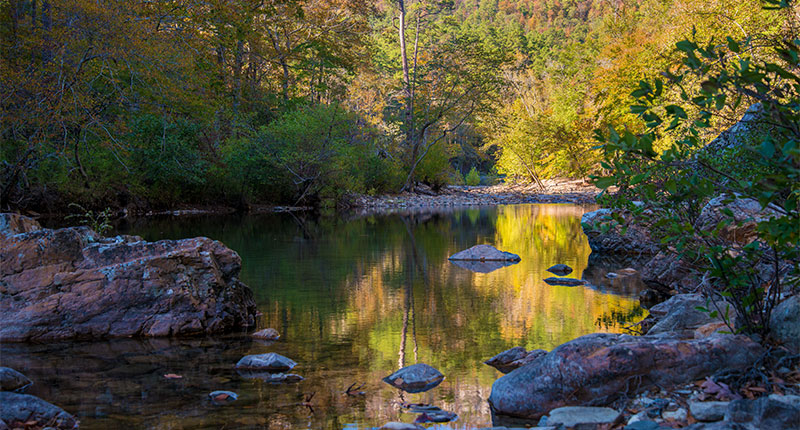 Day 2 started out with an early rise and an anticipation of meeting William Rainey who would be our instructor for the day in a one-on-one photography workshop.  I believe that no matter your skill level is, you can always benefit from seeing how another photographer works. Having seen his work prior to signing up for the workshop I really felt like we would gain insights from his creative vision and gather some solid technical advice.  The day dawned with clear blue skies and not a cloud anywhere.  That’s both good and bad depending upon what you are going to be shooting.  For us, some clouds would be best to add texture to the skies and diffuse the light at times when shooting scenes with water, like waterfalls or reflections.  Either way, the weather was good and the temperature was comfortable so we pulled our gear together and headed to the front of the resort to meet our instructor for the day.

William Rainey arrived in his Avalanche and we introduced ourselves and loaded our gear into the back of the truck and locked it in.  Pulling out of the resort we headed to his restaurant, The Chopping Block, and picked up lunch meats, brisket, cheese, bread and a few other things and filled his ice chest then jumped back in the truck and headed out for Little Missouri State Park where we would spend our day shooting.  Talk about something to look forward to!  The distance to the park isn’t really that far from Mena, but the roads twisted and turned keeping our speed low as we spent our time talking about  how we all got started in photography.  After about an hour we reached a turn-off onto a dirt road that lead us down a bumpy road to a trail head where you could start your journey deep into the park along a trail which meanders along the river. So we parked at the trail head and pulled out out gear and took some time to have a bite to eat before heading down the path.  Even though we were in a popular state park, we entered the park at a point that was not highly traveled and planned to hike back beyond the easy parts of the trail in search of areas that were the least likely to have been photographed before. 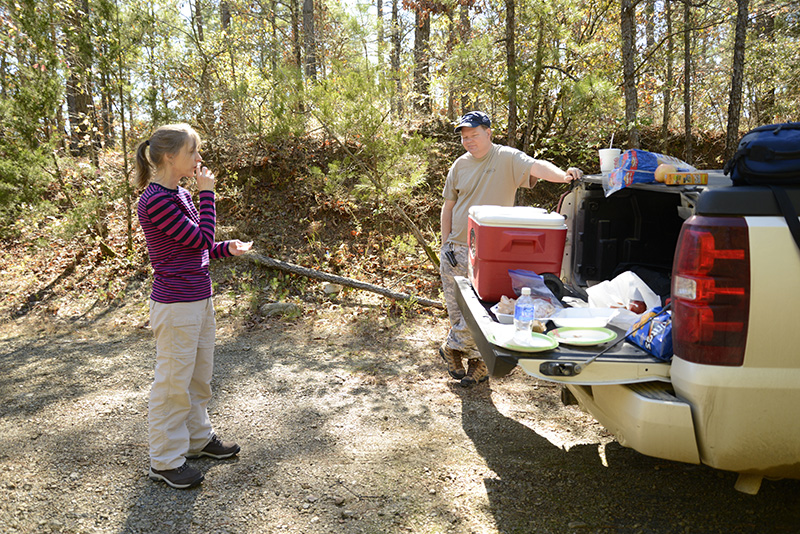 The path starts out almost like a four wheel drive road but quickly turns into a walking path that cuts over to the river and away from it several times.  Our goal was to go about 3 miles down the trail and then cut over to the river to stop and shoot – with instruction from William.  One of the first things we learned from him today was a reminder – that if you shoot an image from a location that everyone shoots from because it is convenient, then your images aren’t going to bring a fresh perspective to anyone.  Even more – selling that image is almost impossible because it has been seen so many times that it ceases to draw people’s attention.  That’s why wearing the right clothes when you go out to shoot is important – uniqueness requires that you get off the trail and away from where everyone else shoots to create images of a place which are not commonplace.  In our case this meant long pants, wicking socks, waterproof boots and  layered upper body attire as we trekked off the path at times to get to undisturbed locations.  At those locations we stopped and took in William’s knowledge about shooting landscapes and working around a scene to find a good shot.  He asked over and over again “what would make that last shot a bit better?  Could you splash that rock to get it wet so it has a nice reflection?  Is there something nearby that would add a pleasing splash of color?  Try changing your position to create a leading line.” 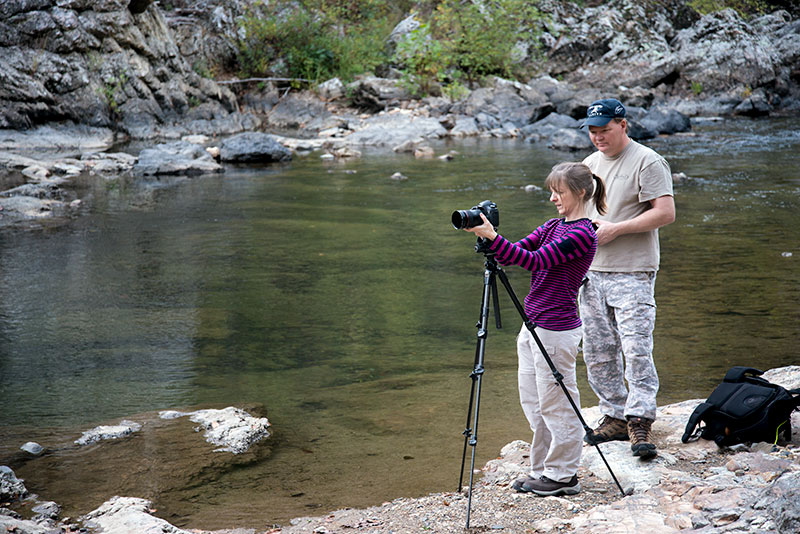 We would shoot for a while from one location and then work our way back to the trail and head further into the woods looking for a new place to shoot.  As the trail became more difficult in parts I felt like our efforts with going beyond the point most people hiked to would give us access to locations that would result in more unique images.  We hiked through tall grass, climbed over fallen trees  and over large rock outcroppings until we reached a point where we could head down to the river again and capture images few people would have seen.  All of the effort in getting to a place that had not been shot repeatedly would more likely lead to images that had more sales potential because of their uniqueness.

Ultimately after hiking in about 3 miles over a variety of different terrains we cut down to the river where we found a winding river strewn with house-sized boulders and water tumbling over ledges in the river! It was here that we setup our tripods and worked to capture a variety of images before the sun got too low and left the area in deep shadow.  With the river being so much lower than the surrounding terrain there was a wide dynamic range of light between the river and the trees up on the sides of the river which were in full sunlight.  We worked with a combination of circular polarizers and neutral density grads which helped balance the light to get more pleasing shots.  We moved up and down the banks of the river and at times waded in to get the composition we wanted.  The river wasn’t too high so we could get further out and shoot from perspectives that would be impossible when the river was higher.  Yet another trick of the trade you might say to getting original images. 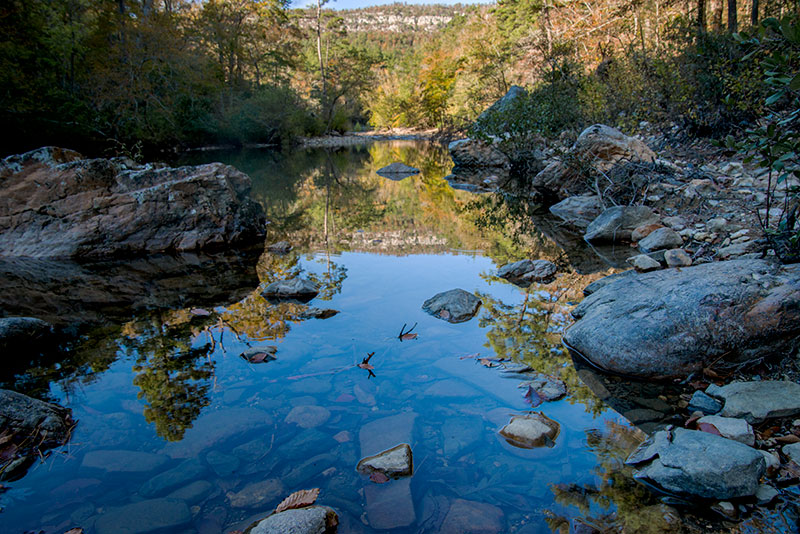 One thing I should mention is that before we took off down the trail William brought along his trail GPS  in case we lost the trail and had to find our way back.  We stayed as long as we could to work the light and set a time to start back so we could travel while there was still some daylight left.  However we pushed it to the limit and our trip back was a pretty brisk walk to get out of the woods before night fell.  We pack headlamps and mini-flashlights in our backpacks, but with the trail not always being plainly visible even in the daylight we wanted to get back with a little light left just the same.  Getting to the trail-head was exhausting given the weight of our packs and once we reached the Avalanche again we dropped our packs and dug into the ice chest for brisket sandwiches  before heading back to Mena in the dark.  It was a full day of hiking, new experiences and learning – and one I’m glad we got the chance to do.  I have always recommended to  photographers I know to to take the opportunity to go shoot with other photographers – especially those whose work you admire.  With each and every time you do this you will find your own view of photography expanding.