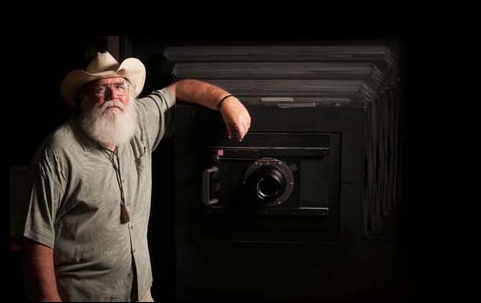 Those who know me know I’m a fan of large prints – the kind that have the details and depth that make you feel like you are almost standing in the scene.  These are the kind you will find at Clyde Butcher’s galleries in Venice and Ochopee, Florida.  While I’m working to create mine with a Nikon D800E and Really Right Stuff panoramic rails, Clyde Butcher creates his works of art with an 8×10 camera one shot at a time.

His images are created with a large-format 8×10 Deardorf film camera which he uses to create large format prints.  To give you an idea of what I mean by this, the developing trays he uses to create his prints measure 4 feet by 5 feet each and allow for making prints of varying sizes.  Butcher is owner of two successful galleries in Florida which sell his prints, books and DVD’s of the PBS specials that cover his photography.  Originally trained as an architect, the lure of the swamps and capturing their beauty eventually convinced him to leave his architecture practice and pursue creating images of the magic of the Everglades.

In 1971 Clyde established his business, Eye Encounter, Inc., and began selling his photographs as wall decor to department stores such as Montgomery-Wards, J.C. Penny’s, and Sears. To enhance sales, he began to use color film, and also a 5″x7″ view camera. In addition to photographing landscapes in California, he also began to take pictures in Oregon, Washington, Wyoming, Ohio, and Hawaii. Eye Encounter became a multi-million-dollar business, employing more than 200 workers. Though due to the stress of the business Clyde sold it in 1977. To regroup he then built a sailboat and trailered it across the country to Florida.

Clyde moved with his family to Ft. Lauderdale, Florida and after a short while he longed for a slower pace and moved to Ft. Myers in 1980. Clyde then began selling his color photographs of the American West at Florida art festivals. After briefly looking around Florida and not seeing anything to photograph, he began producing manipulated photographs with an outer-space theme.

In 1983 Clyde began photographing Florida beaches, still using color film. It wasn’t until a visit to Tom Gaskin’s Cypress Knee Museum in 1984, a roadside attraction in central Florida, that Clyde was introduced to a new side of Florida. He states, “after strolling on the boardwalk through a primeval cypress swamp, a whole new world was opened up for me”. He then met Oscar Thompson, a Florida native, who introduced Clyde to the “interior” of the Big Cypress National Preserve and the Everglades by taking Clyde on his first walk in to the swamp. After his immersion in to the beauty he found so mysterious and primeval, Clyde was then inspired to take black and white photographs of the swamp.

In 1986, Clyde’s 17 year old son Ted was killed by a drunk driver. After which, Clyde found solace in the wilderness of the Big Cypress National Preserve, where the mysterious, spiritual experience of being close to nature helped to restore his soul. Resolving to relinquish his ties to color photography, he destroyed his color work and vowed to use only black and white film. He purchased an 8″x10″ view camera and enlarger, adding over time ever larger enlargers to his darkroom studio to enable the printing of large prints that bring you right into the scene.

You’ll find his web site at http://www.clydebutcher.com and can visit his Big Cypress Gallery at  52388 Tamiami Trail Ochopee, FL or his Venice Gallery at 237 Warfield Avenue Venice, FL.

Clyde Butcher: In The Darkroom